October 26, 2016 By Admin No comments yet Squirrel removal from chimney

There are only two scenarios when it comes to squirrels in the chimney; they are nesting in the chimney and can get in and out at will or the squirrel has accidently fallen 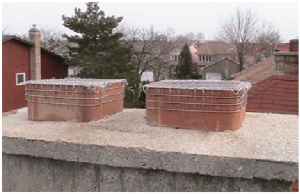 inside and can’t get out because the chimney flue at the bottom is too slippery. If it has fallen inside accidently you will definitely hear the squirrel scurrying around and trying to get out. If it’s nesting inside, they will go down halfway and build their nest blocking the flue. You may not hear them in that case. You would have to see them as they get in, in order to realize that they are there. How do I get them out?

The best solution is to call a professional squirrel control company to humanely remove the squirrels and cap the chimney for you. This could be dangerous work and we don’t recommend anyone without the necessary experience to attempt a D.I.Y removal.

If you feel confident that you can remove the squirrels yourself, you would need the following tools before you start. An extension ladder, flashlight, heavy gauge screening, and pliers. If the squirrel is stock you will need and extra 25′ 5/8″ rope.

Install your ladder and using your flashlight look inside the chimney flue. If you see the squirrel inside, make noise and convince it to leave. If the squirrel is already out then half of the job is done. Remove the nesting material if you can and/or use the fireplace in winter. Cover the chimney with the screening you have already purchased. Use the plier and make sure it is as tight as you can make it. Congratulations! you have successfully removed the squirrel and sealed the chimney. 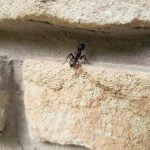 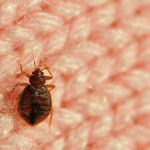